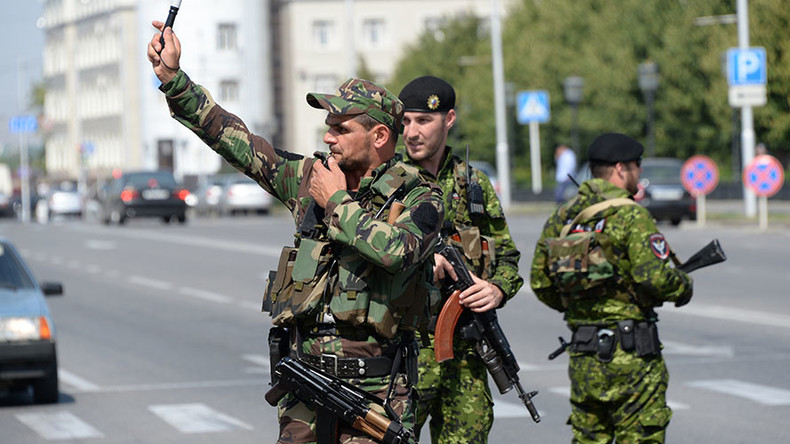 The acting head of the Chechen Republic also chided journalists for reporting on the nine-minute video circulated on the internet. “I see with great surprise that the mass media in our country are circulating the news about some statement made by the ‘Iblis State’ [Islamic State/IS, formerly ISIS/ISIL], practically helping the threats of just one bandit to reach millions of people,” Kadyrov wrote on Instagram.

His reference to IS as ‘Iblis State’ follows a move suggested some time ago by Muslim scholars who claimed that terrorism had little to do with real Islam, but was the work of the devil Iblis.

“This scum [making the video] has received his goal. He wanted to be heard and this wish was granted to him in the shortest time possible,” the Chechen leader added.

Kadyrov also noted that Islamic State’s declaration of jihad against Russia was just a hollow threat, and that in his opinion the whole nine-minute video had been made and distributed by Western special services as part of their ideological war against the Russia – whose troops could quickly eliminate IS were it not for various external hindrances and complications.

“I have every reason to believe that this statement was prepared in the offices of Western special services and is part of the informational and ideological war they are waging against Russia. No one will come to Russia! These threats, whoever is behind them, are nothing but empty blabber,” he wrote.

“Russian Armed Forces made the terrorists run with their tails between their legs in Syria. The terrorists’ days are numbered. We can completely destroy the Iblis State in its own lair and if anyone decided to start moving towards Russia, we would interrupt this raid very far from our borders!” Kadyrov stated.

“I repeat – we will visit those who had the careless idea to threaten the Russian people and Russian leaders!” he concluded.

Earlier this week, international news agencies reported that a video had appeared on YouTube in which unidentified armed people threatened Russia with jihad and called on supporters of Islamic State to join the fight.

On Monday, President Vladimir Putin’s press secretary, Dmitry Peskov, told reporters that the threats would not affect the Russian policy of fighting terrorism in the Middle East.

Acting Chechen leader Kadyrov, a devout Muslim, often addresses the global Muslim community with claims that Islamic State was created “first of all against Russia,” and warned of the threat the jihadist group and the conflict in Syria pose to Russia’s security.

He has also repeatedly accused the US and other Western nations of “spawning” IS in order to incite hatred towards Muslims all over the world, distract public attention from numerous problems in the Middle East, and destroy Islamic nations from the inside.

In October last year, Kadyrov asked President Putin to send Chechen units to fight IS in Syria, adding that his fighters have sworn to fight terrorists till the end. Kadyrov also noted that Chechen special forces units were at a very high level of combat readiness and promised that “as soon as the terrorists in Syria understand that we are heading there, they will very quickly get out,” adding that terrorists have little experience of real warfare.

At the same time Kadyrov acknowledged that the fight against the IS threat must not be limited to military methods, but should also include education – the younger generation must be taught that extremist groups use the wrong interpretations of the Koran.