“Our experts have determined that out of 85 federal regions, 62 had practically no violations, and the elections there were conducted on a very good level. Others did have violations, including some that can be blamed on regional leaders,” Ella Pamfilova told Russian President Vladimir Putin at the meeting. She also said that her agency had decided to sack 32 heads of territorial elections commissions as punishment for the violations.

The Russian elections chief also said that the national polling system needed some improvements, as the 2018 presidential election approaches. In particular, she requested that all polling stations have mandatory video monitoring, which was introduced in 2012 but cancelled in 2015 due to the high costs. 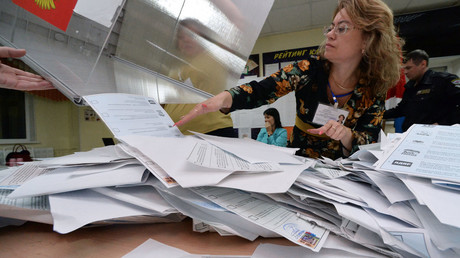 Pamfilova said that the commission specialists had found ways to drastically reduce costs, and the new system would require about three billion rubles ($50 million) of federal funds, not the 13 billion rubles needed in 2012, which then was about $405 million.

She also proposed setting up a special working group with the presidential administration that would oversee the implementation of this project.

The president agreed that the measure could improve the general quality of elections and promised to consider the proposal, but also said that the budget for video monitoring required approval from the government.

“The cleaner and more transparent the elections are, the greater is the legitimacy of the body of power formed by these elections,” Putin told Pamfilova during the meeting.

Putin’s centrist United Russia party won the September State Duma elections, getting 343 seats in the 450-seat lower house. The Communist Party took 42 seats, the Liberal-Democratic Party got 39, and 23 went for the center-left Fair Russia. Representatives of the Motherland and the Civil Platform parties received one seat each through elections in independent constituencies, and one seat went to an independent candidate. The overall turnout was 47.8 percent of Russia’s 111.6 million eligible voters.