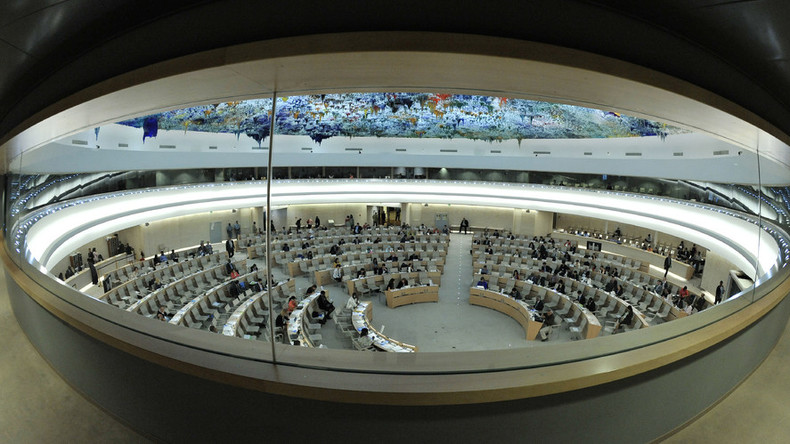 “The demands of rights activists to purge Russia from the UN Human Rights Council is a humanitarian farce and a speculation with use of politics and sanctions,” a member of the State Duma Committee for International Affairs, Adalbi Shkhagoshev, told RIA Novosti.

“This is reminiscent of the late 1990s when rights advocates thought that terrorists in the North Caucasus were nothing more than insurgents,” Shkhagoshev said. “In this most difficult of times not a single expert could call these bandits terrorists and admit that Russia was saving the world from the terrorist outrage.” 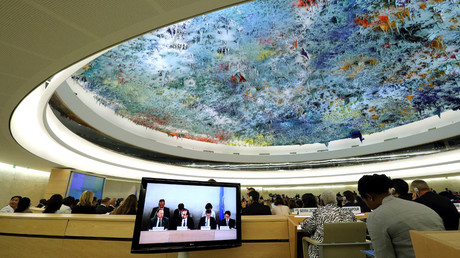 The comment came soon after news agencies reported that 87 human rights and aid organizations had signed the appeal to the United Nations asking to remove Russia from the UN’s Human Rights Council.

The list of signatories included such organizations as Human Rights Watch, CARE International and Refugees International. The authors of the document asked all UN member-states to question Russia’s role in Syria operation, claiming that the actions of Russian Air Force and the Syrian military had allegedly targeted civilians and civilian objects.

Russian membership in the UN Human Rights Council expires later this year. On Friday the UN General Assembly is scheduled to select members to fill 14 seats in this body, with Russia, Hungary and Croatia running for two seats representing the Eastern European group at the council.

The head of the upper house’s Committee for International Affairs, Senator Konstantin Kosachev, called the initiative “a part of information war waged by the West against the Russian Federation.”

“This is the very same hybrid spin, the use of which other nations love to attribute to Russia. After the United States failed to fulfill their obligations on separating the ‘moderate’ Syrian opposition and terrorists they decided to put their bets on ‘horror flicks’,” the senator told RIA Novosti.

He also said that overwhelming majority of groups mentioned in mass media reports about the appeal were “insignificant Syrian structures” and the phrase “over 80 humanitarian organizations” should be taken with a grain of salt.

Kosachev reminded that the 25th special session of the UN Human Rights Council had been called on the initiative of the groups of states led by the United Kingdom and is dedicated solely to the situation in Aleppo, Syria.

“This is the point of the whole campaign – they want to make Aleppo a separate humanitarian case and make everyone associate Russia with it as the alleged main culprit.”

The senator added that because of this scheme western mass media and right activists were deliberately ignoring the shelling of western Aleppo from the eastern parts of the city and Russia’s efforts to save local civilians, such as the humanitarian pauses and establishing humanitarian corridors.

“The draft resolution prepared by Western nations contained no demands to the sponsors of terrorists and guerillas to cease fire, stop attacks and remove blockade of humanitarian convoys, lift the siege of settlements as stop using civilians as human shield,” Kosachev told reporters.

“The resolution demands that the Syrian regime and its allies stop air raids and combat flights over Aleppo regardless of the fact that there were no such flights for a week now. But who cares about such minor facts?”