Quarter of Russians back potential recognition of Donbass republics The state-run VTSIOM public opinion research center reported that about half of all Russians currently thing that their government should help the Donetsk and Lugansk Republics. However, opinions about the exact nature of this help varied greatly.

Some 24 percent of respondents said the Russian government should recognize the Donbass republics as independent states, 18 percent said it should go even further and accept the two regions as members of the Russian Federation. Eight percent answered that Russia should simply help Donetsk and Lugansk achieve greater autonomy without changing their current status.

Only 4 percent of Russians said Moscow should help the Kiev regime to gain control over the Donbass republics.

Thirty-six percent insisted the Russian authorities should assume neutral position over the situation in the southeast of Ukraine. 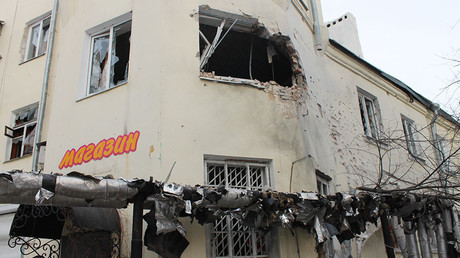 The head of VTSIOM’s department for research projects, Mikhail Mamonov, said the poll showed that the average Russian believes the Donetsk and Lugansk republics can no longer be considered parts of Ukraine. He said that this was the main conclusion one could draw from this particular study.

At the end of last week, Russian President Vladimir Putin ordered state agencies to accept passports and other documents issued “in certain parts of the Donetsk and Lugansk regions of Ukraine.” The same decree also allowed visa-free travel to Russia for holders of such documents (the same rule applies to Ukrainian citizens).

According to the decree published on the Kremlin website, the main motive behind the move was to protect the rights and freedoms of people who live in these territories.

Russian Foreign Minister Sergey Lavrov commented on this order on Saturday, saying that accepting the Russian official position on the self-proclaimed republics of Donbass has not changed. He said the order concerning the passports was necessary in order to offer some relief to the residents of the regions, impoverished and destroyed by war.