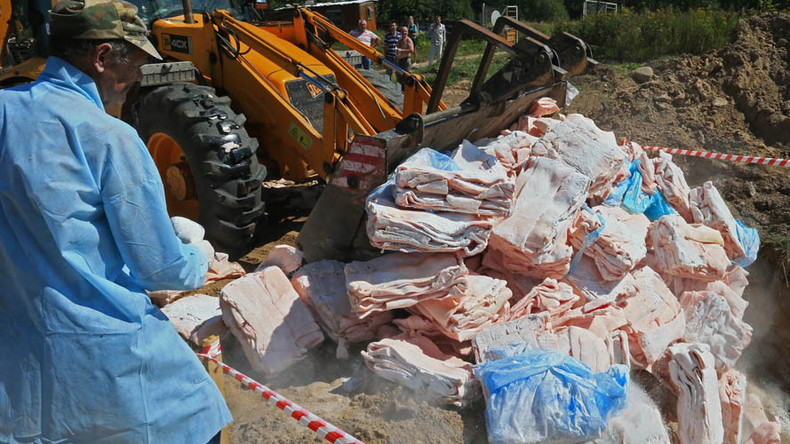 Anton Belyakov, who represents the central Russian Vladimir Region in the upper house, wrote in the explanatory note attached to the draft that according to statistics, the average real income of Russians is currently in decline and the number of poor in the country is growing.

As many people have to spend over half of their income on food, Belyakov believes such a situation justifies a change of rules that allows “handing [seized food] over for social needs for free” after the authorities have checked its safety, rather than automatically destroying it.

Moscow imposed a ban on the import of meat, poultry and fish, cheese, milk, fruit and vegetables from the US, EU, Australia, Canada, Norway and various other countries in August 2014 as a reciprocal measure after those countries sanctioned Russia over its alleged role in the Ukrainian political crisis.

The ban was initially to last for a year, but was later prolonged until August 2016, and more recently until December 31, 2017, due to the unwillingness of the West to lift its restrictions on Russia.

The order to destroy the seized food was introduced in July 2015, changing previous rules which had ordered the banned products to be sent back to the country of origin, which served to encourage attempts at smuggling.

Representatives of the Russian state watchdog Rospotrebnadzor have told reporters that the number of attempts to smuggle embargoed products into the country had fallen by 10 times after the decree on their destruction was signed by the president and even before it came into force.

Russian politicians and activists have several times proposed canceling the order on destruction of the food and to make better use of any products seized.

In August 2015, the Communist Party of the Russian Federation drafted a bill proposing to make the confiscated food state property and to use it as aid for the poor, victims of natural disasters and other disadvantaged groups.

MPs from the center-left Fair Russia party proposed sending the seized contraband to the war-torn regions of Lugansk and Donetsk, which are suffering from a humanitarian crisis caused by the pro-Kiev military.

Neither of these proposals has been considered by the Russian parliament so far.